Well I'm not going to say Pennsylvania was horrible, but I'm not going to say it was fun either. If anyone ever asks about the views in PA all I can say is that I saw very few.  I spent most of my time looking down so I didn't see much.  The rocks in PA are tough, add a little water and some big rattlers and they get even harder.

I saw several small rattlers like Eastern Diamondbacks and a few huge Timber Rattlers... I'm talking like the the thickness of my arm.  My first encounter with one was while it was raining.
I found that while the boulders are hard to walk on when they are wet, it can be even harder to try and walk around them when there isn't much ground to step on.  So I in these big boulder areas I find all the "flat" boulders that can provide easy footing even in wet conditions. As I was finally beginning to enjoy my wet saunter though the woods and boulder fields, my trip almost came to quick halt. Hopping boulders one at a time at a fairly quick pace, I moved to step down to a smaller boulder that I couldn't see from a distance. Problem was this boulder moved! I saw a huge Timber Rattler lift his head up as I approached and I quickly shifted my left foot to an adjacent rock on my right which was not so flat. The resulting step made me fall down to the level of the ground using the rocks as a landing pad. The words "May day! May day! I'm going down!" ran through my mind as I hit the rock squarely on my forearms. I don't think I even felt the jolt to my body as my feet were now laying less than a foot from a rattler whose head was bigger than my fist, and I wanted OUT OF THERE! Faster than you can say "Snake bait" I leaped forward about 10 feet from the rock and crash landed on some rocks in front of me. I turned and looked and saw the rattler put his head back down like he was going to go back to sleep.  Ok I guess I was never a concern for him.

In the first 3 days of being in nj I decided that this is my favorite state on the AT. I didn't decide this just because I'm from jersey. This state has so many beautiful views. There is so much to see in the short time we're hiking through the state. I'm not talking about Newark or the  smog. I'm talking about views of Sunfish Pond, the southern most glacial lake on the AT. I'm thinking of the ridgeline views that overlook other lakes and towns. I envy the open views from mountain balds that I didn't know we had. So now when I think of Jersey, I think of family, friends, dinners, delis, the shore, Bruce Springsteen, Bon Jovi, and the best part of the AT.

I've been used to the bears in Shenandoah that know when to make room for a hiker... by the sound of the poles being tapped together. No here they have to be asked to move. The NJ bears are hungry enough that they can distinguish the difference between a hiker carrying ramen noodles and hiker loaded up on kosher deli food. The bears here are a good indication for hikers to know where to find food too. They tend not to be too far from a road loaded with variety of food options.  Of course they didn't tell me this in the guide books. That would have been too easy.

So far in NJ I've seen 3 bears and heard about 6 more near the trail. It had been really cool to see how they react to hikers. Definitely no need for a gun or bear spray. Still we try to be careful about encounters and storing our food. I refuse to be the hiker you hear about on the news that got accosted by a bear over a Snickers bar. All my food goes into the bear box or gets hung from a tree. There's no guarantees though.

Well with another state down (PA) and over 1300 miles hiked, I'll be going slow this week to get myself setup to be with the family for the 4th of July. That's fine with me since NJ had been so good and Harriman State Park in NY is one off my favorites. It'll be fun! 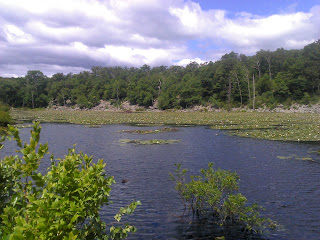