Where oh where have I been? Well no where there's a decent internet connection or computer to use. It's been too long since I've had the ability to write a blog (one month exactly) and the battles I faced have taken their toll.

Well after my time off the trail, I got back on the trail and really steamed ahead. When I got back to the trail in Hampton, TN I was at mile marker 425. Today I stand at 856 miles in Waynesboro, VA just at the beginning of Shenandoah National Park and near the end of the long Virginia hike. Here's some of what I encountered.

When I first entered VA, I headed into Damascus for a day off and weather updates. Snow was coming our way! When I first left for Springer Mountain in the beginning of March, I half thought I would run into snow in the first couple weeks. Instead I had good weather carrying me all the way through to Virginia... until I left Damascus.

Let me be clear, I love hiking in the snow! It's sleeping in the snow I'm not a fan of. In order to avoid sleeping outside I made a beeline to the Thomas Knob shelter. The snow was packed, the ice was thick and the wind was freezing cold. I thought being in a shelter would be warm, but this place let the wind right through. I spent most of my night keeping the digits from freezing off.

While I enjoyed my hike in the snow, I missed the main feature of the Grayson Highlands, the wild ponies. They were smart enough to stay well hidden in the woods during the snowy weather.

After a good day of hiking and a bad night of sleep, the next day I got back to work to get off the cold mountains. After a mostly uneventful day, I decided to camp at Hurricane camp ground a little further past the shelter with some friends Jacob and Amy. Unfortunately this tenting was not free but the camp host gave us so many things that it made the stop with it. Marsha the camp host gave us fruit, soda, baked us cookies and prepared my favorite for breakfast, hot chocolate! Then she offered to slackpack us up to the next stop 17 miles away at a ranger station. Slackpacking is when someone takes your backpack to your next stop for the night and you get a day pack for the day to hike with a lighter load. We happily accepted Marsh's offer and did the 17 mile hike in just over 5 hours. Sweet!

Ever take a dip into freezing cold water just for the fun of it? Dismall Falls was a short side trip on the hike that provided such an opportunity. I spend several minutes in the water just trying to let every part of my body get cooled down. It was quite refreshing, that is until after 20 minutes I had no feeling in most of the my body. The current that took the water over the falls was very strong (yes I was on top of the falls) and that is to say that if I just went limp I would have been carried off like a rag doll over the edge into the pool below. Fighting the current to get to the shore wasn't too bad, it just was made harder by the attacking wasps that I disturbed on the opposite side of the creek. I did lots of ducking and holding my break under that cold current. Very refreshing!

I have a new snack! Something I learned and perfected at the Woodhole Hostel just south of Pearisburg, VA. Take 1 Krispy Kreme glazed doughnut and very carefully place 1 marshmallow into the center of the hole. Put the whole thing on a stick and hold over a camp fire until the marshmallow is very brown. AWESOME SNACK... if you're not diabetic. It works good with jelly doughnuts too, just put the marshmallow inside and let it melt.

For the last several years I have had most of my inspiration to hike the AT come to me in the form of a DVD documentary created by a hiker named Lion King. I love the DVD and all the music he used for the show. I've listened to thing 1000 times, watched it at least 100 times and can never get enough of it. Well one beautiful day north of Daleville, VA near the Blue Ridge Parkway I ran into the Lion King headed southbound on the trail. I couldn't believe it! Here I am with the guy who helped inspire me to do this hike! I thanked him to no end and we talked for awhile about his new DVD he was planning on selling at Trail Days. What I great guy! I would encourage anyone who wants to know more about the AT or long distance hiking in general to check out his videos which are called "Walking with Freedom", "Walking West with Freedom", and "A hike on the American Discovery Trail". All videos are sold on Campor's website ( http://www.campmor.com/outdoor/gear/Product___52640 ).


Why am I doing this?

I had some seriously tough days in Virginia. Everyone says Virginia is flat. I DISAGREE! I had hit several days of nothing but uphill for 12 miles. The uphill battles still hurt I don't care how many miles I have under my belt. To make matters worse I had been hiking in bad boots (they gave up on me actually). I had to desperately buy a new pair in Daleville. Big mistake! I bough a pair of Obozs (a new no name brand trying to compete) for $145. After 78 miles they delaminated at the toe and I had to get rid of them. I bought a another pair of Merrel's for less and they are much more comfortable. Still having the pain in my feet, ankles, knees and legs made me question everything I was doing. Add the heat in the afternoon to the uphill climbs and the hike just gets tougher. Hot chocolate just doesn't seem to be an option anymore now that it's warmer. :( I'll just keep on as I remember that there are still several thing I want to on this trail. 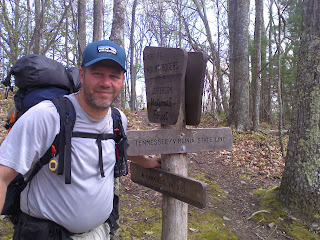 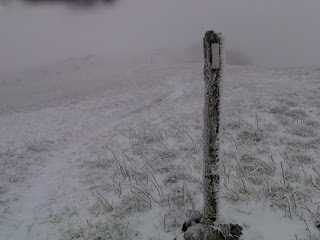 Cold snow day on a bald 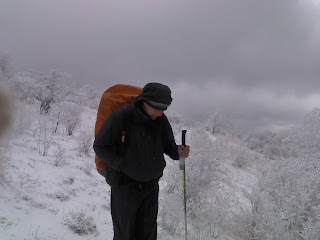 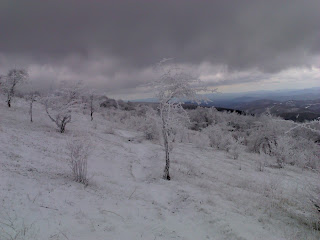 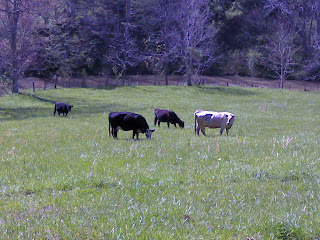 We pass many cows on the trail 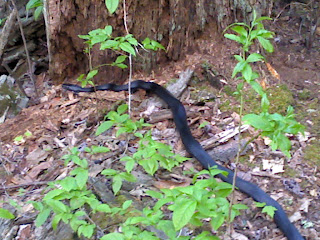 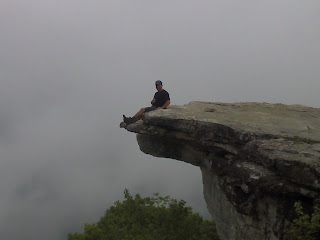 Me on McAfee's Knob 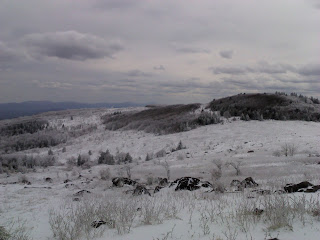 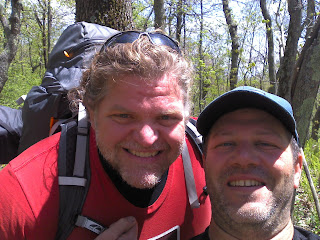 Lion King and myself